skip to main | skip to sidebar

I just have to brag

Yes I am a proud momma! Collin has done a few things lately that have just made our hard work pay off. At a friend's house he needed a band-aid. After getting it on his finger he said thank you and picked up the band-aid wrapper and threw it in the trash! Woohoo!
He is my little pacifier finder. Whenever Marissa's pacifier falls under her crib I just call Collin and he runs and finds it. Such a good brother!
He is also so good about throwing trash, diapers, and all kinds of stuff away. He is starting to put his sippy cups back in the fridge when he is finished (without us even asking :) ). He also will take his plate to the sink if it's empty and to the counter if there is food on it.
He throws his dirty clothes in the hamper and puts his clean clothes back in the drawer.
At night before stories he'll help us clean up all the toys usually without a fight.
So a month or two ago he started fighting nap time. He would get out numerous times and cry and cry when I'd put him back to bed. I knew I had to persevere because not only is he cranky without a nap, but I want to hold on to nap time as long as I possibly can. So just the last two weeks he has stopped fighting and he even willingly goes. My secret, I tell him you have 5 more minutes to play before nap time. I tell him I am going to set the timer and when it goes off, nap time. When he hears the beep he stops what he's doing says nap time and we walk into his room without a fight! Wonderful!
It is so so so rewarding when he does things all on his own. He is learning so fast and just soaking everything up! What a sweetheart! Love this little guy.

Collin the shots, our favorite Collinisms

So we have a friend that does this every month and I just love it, so I can't say this is original, thanks Marcie for the idea. Collin is starting to say so many funny things. We love hearing him talk. His sweet little voice, so innocent. Here are the funny things he said this month...

Collin - "I watch cartoons?"
Mommy - "I have to see what time it is."
Collin - "Cartoon time!"
We sure love these little people. Marissa stood up for the first time 2 days ago. She was holding on to the toy box and stood right up. She's moving way too fast if you ask me. But we sure love it. We also had our first set of stitches, and I'm sure it won't be the last, unfortunately. While I was at church playing floor hockey with some women Collin somehow got his finger stuck in a door and got a deep cut. We had to take him to the urgent care where he got 4 stitches. No fun, especially with 2 crying kids. Yuck. Poor guy, he has been brave and good about it. Now the hard part is trying to get the band-aid off so we can check it. These kids keep us on our toes and we just love them. Here are some of the latest pictures. 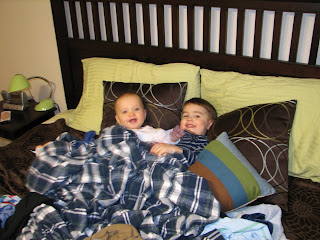 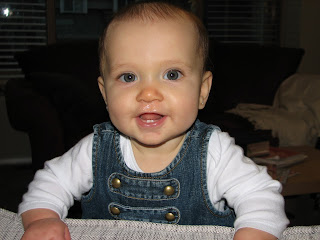 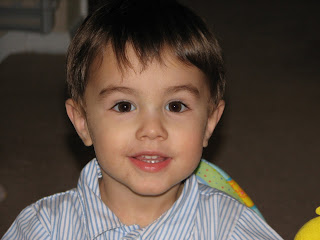 Adam and I were married for time and all eternity August 11, 2005. We love life and love this crazy little adventure of raising a family!

Collin is a fun, silly, lovable five year-old. He has a contagious laugh and brings so much joy to our family.

Marissa is our little sweet and sassy little 3 year old.

Trevor is our precious little blue-eyed baby. He is sweet and easy going and we all adore him.